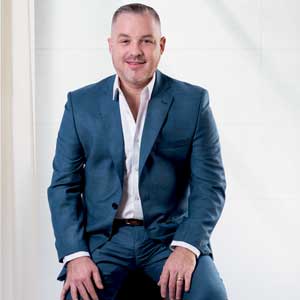 Brad Flaherty, Founder and President Who would have thought that the closure of PanAm, in 1991, would lay the groundwork for Brad Flaherty’s fascination with technology and his eventual passage into entrepreneurship?

When the global air carrier went out of business, Flaherty’s grandfather, a former Director of Maintenance and Mechanics of PanAm in Miami Florida, brought home one of the discarded machines— an IBM 8088, one of the world’s first personal computers.

When most boys and girls of his age were out being teenagers, Flaherty was running a multi-line bulletin board system (BBS) connected to the computer of his best friend who lived around the block. The pair of geeks proceeded to use a 300 baud dial-up modem to transmit written messages to one another. “We could have easily conversed over the telephone, but there was something exciting about reading characters on a monochrome screen, long before the internet or cell phones. Of course, my mother wasn’t very thrilled since she had to pay the bills for four telephone lines,” recalls Flaherty, the founder and CEO of RemoteWorks, a South Florida-based provider of IT infrastructure services with an established niche in healthcare.

RemoteWorks’ engagement with healthcare is only natural. Since the age of 18, Flaherty has been intrigued by the connection or lack thereof between IT and the healthcare environment. Appreciative of the efforts taken by physicians to provide better care to patients, he always felt technology had a bigger role to play in the patient-physician relationship. After studying and working with a number of EEG and nerve-conduction machines that his physician clients challenged him to configure, this quickly grew to the setup and maintenance of diagnostic imaging equipment such as MRI, CT, UltraSound and many other significant modality types used today; Flaherty found his calling in the healthcare IT spectrum. The transition was rather seamless due to Flaherty’s understanding of connecting various devices to a network, albeit diagnostic pieces of medical equipment require special protocols, authentication, and encryption methods and of course, compliance.

Today, Remoteworks has a strong presence in South Florida, where it provides healthcare IT services to the biggest physician groups across the state. The company is also responsible for the largest billing arm for hospitals in the state of Tennessee, fulfilling such a monumental project without actually visiting the region in nearly four years.

Although RemoteWorks provides managed IT services and hosts private networks for clients across industries, it has been synonymous with healthcare IT, providing consultation, support, and implementation for the many products utilized by healthcare businesses and practitioners. An expert in EHR technology, RemoteWorks is equally proficient in developing cutting-edge speech recognition and imaging solutions to simplify life for both physicians and patients.

This proficiency can be attributed to RemoteWorks’ association with many of the industry leaders in the healthcare space. In 2008, four years after founding RemoteWorks, Flaherty co-founded Healthcare Data Solutions, which was selected by the industry giant, Allscripts, to be a premier dealer for the Allscripts MyWay EHR program. Since that project, which included training, installation, and support of Allscripts software for physicians across the country, and the data hosting of their EHR records, Flaherty and RemoteWorks have grown considerably. The company utilized the knowledge acquired from the Allscripts project to undertake another critical project with Aprima—a provider of innovative EHR, practice management, and revenue cycle management solutions. As part of the project, RemoteWorks executed technology installation and EHR data hosting for over 600 physicians, across a span of seven years for Allscripts and the Aprima solutions.

I am nothing without my team. They are the real stars, and we get better every day—thanks to them

Subsequently, Flaherty, a serial entrepreneur, also co-founded Healthcare Conversion Services (HCS) to support the need to transition healthcare data from legacy systems to new systems—which became the fundamental conversion arm for Allscripts and Aprima during the vast move to Electronic Medical Records processing and automating discreet data conversions for tens of thousands of systems. In addition, countless HL7 Interfaces have been created by HDS’ internal engineersbetween disparate systems that seamlessly and securely connect and pass data from one to another every second of the day.

Today, RemoteWorks continues to solve complex bottlenecks in the IT healthcare space, which include the conversion, usage, and transfer of discrete EHR data across disparate systems, the interconnectivity between phone systems and applications, and the integration of latest APIs into healthcare systems—all the while ensuring clients remain HIPAA-complaint. Just take the example of a large physician group, a client of RemoteWorks, which is planning to disassociate itself from a South Florida-based hospital due to the facility’s lack of sound processes for information/documentation exchange. To fix the predicament, RemoteWorks is presently working with the Public School Systems to streamline electronic document transfer between the physician group and the pediatric hospital.

As part of the project, RemoteWorks will build a series of SSL connections with automation between its client (the largest physician group of this particular specialty in Florida) and the Public School System, to instigate the transfer of electronic documentation. Presently, parents are required to physically collect and process medical documentation throughout the school year, which is an antiquated method that proves time-consuming to the parents, doctors, and schools. Through the project, RemoteWorks will also eliminate the need for expensive private connections between the physician group and the school, by hosting their encrypted correspondence via a HIPAA-centric VPN connection. Other deployments would include a patient portal and preventative maintenance services to ensure an optimal experience for all the stakeholders.

Speaking of techo-trailblazing, RemoteWorks is immensely proud of its 15+ year relationship and ongoing project with First Choice Neurology, America’s largest physician group of Neurologists. As revealed by Flaherty, a RemoteWorks-built multi-site, extremely efficient network that has grown organically, has altered life for tens of thousands of patients and over 100 neurologists across 60 locations. Flaherty and his team are extremely proud of the system they have supported to create where other medical groups consistently model after FCN’s success.

Such success stories would not be possible without RemoteWorks forging strong partnerships with technology vendors.

For example, to safeguard the various cloud-based EHR systems and client networks, RemoteWorks has had a platinum partnership with Sophos for nearly 15 years, a global leader in next-generation cybersecurity with a track record of protecting healthcare and other systems better than the rest. However, RemoteWorks does not stop at the deployment of various Sophos EDR, MTR, and ransomware protection solutions and services. Going above-and-beyond the norm of a service provider, RemoteWorks runs innovative phishing campaigns to detect vulnerabilities in a client’s user base to assist with internal security awareness (SA) training; an ongoing requirement of HIPAA law. By leveraging a Sophos product titled Phish Threat, RemoteWorks traverses its client networks and sends out phishing emails that resemble the ones sent by the wrongdoers. This way, it can capture the segments of the emails users click on, and accordingly provide cybersecurity training to its clients. As Flaherty states, the tactic is a form of “positive deception,” with proven benefits to combat harmful environments, to train users and to maintain compliance; a triple win.

Along the same lines, RemoteWorks is working closely with partners to develop preventive measures to ward off security threats, especially ransomware attacks that pose the biggest hazard to healthcare systems and government agencies. While not giving away too many details, Flaherty calls the future plans as “interesting, next level mitigation strategies” designed to protect healthcare systems— again using positive deception to stump or hack the hackers.

Through such partnerships, RemoteWorks—which strictly associates with only reputed vendors with a proven track record— reckons it is “revolutionizing healthcare IT” by taking ideas and solutions from other industries and transferring them to healthcare. “Why reinvent the wheel when you can utilize the best available tools and proven partners? Our philosophy has always been to place the right people and ideal technology in apt environments. However, once in the client environment, we are not a silent component, but the engine that runs it all,” stresses Flaherty, before mentioning the specifics of a typical RemoteWorks product/services deployment. Every RemoteWorks project, he says, begins with a bottleneck discovery stage, and kicks into high gear when Flaherty and his team “create slick maps for people to slide through.”

Although Flaherty’s passion for technology has been a key driver of RemoteWorks’ success, the leader of the pack is quick to admit that he draws inspiration from his boisterous and awe-inspiring teammates, who are just as passionate about technology. “I am nothing without my team. They are the real stars, and we get better every day—thanks to them,” says Flaherty.

The RemoteWorks “family” eats thanksgiving meals together, carries musical instruments to work to collaborate on tunes, and isn’t shy to sport bright-colored attires at work. In fact, the RemoteWorks HQ, an apt representation of picturesque South Beach, is brimming with colorful cubical(s), workstations, art and walls.

Fun and games aside, RemoteWorks has maintained a spotless record with regard to client and employee retention, since its inception in 2004—courtesy the company’s incentive programs. Clients appreciate the low turnover rate since it eliminates the need to “re-learn a technology” and allows RemoteWorks to sustain the same standard of service delivery. Flaherty says “It is impossible to foster long term relationships with our clients with a revolving door of engineers and the way we have found success with this is to share a piece of the pie”

While fostering an environment for employees to thrive in, RemoteWorks also creates lines of businesses that allow team members to participate and generate their own revenue streams. As such, every time a technician (a term that Flaherty despises, prefers teammate) brings in a new line of technology, they own a part of that solution offering and collect royalties every time the same technology/service is deployed to future clients. For example, Armando owns royalties for all 3CX-related projects, and Randy is responsible for bringing in several Data Hosting accounts with Azure, both major component of RemoteWorks offerings. Often times, Flaherty, who sits on various healthcare advisory boards, brings in suggestions to his team members on emerging technologies, and his teammates take the ball and run with it. By the same token, Flaherty also presents new technologies to medical committees and subsequently creates business/pricing structures that are acceptable to potential clients.

Looking ahead, RemoteWorks is resolute in its intention “to constantly evolve with time” and “do morally-correct work” without taking advantage of its customers— an approach that has enabled RemoteWorks to remain a viable player in the healthcare IT space for two decades.

To Flaherty, a just-turned father, the end goal is not driven by monetary gains. It is to sustain strong relationships with clients and position his teammates and their families to capture their goals and dreams. In fact, RemoteWorks has already turned down several opportunities to be acquired by bigger healthcare IT corporations. “We refuse to be acquired unless there’s an opportunity where we can retain our core principles and continue to operate within a similar framework. Ultimately, we feel blessed to be working within the healthcare space, and positively impacting the lives of physicians and patients,” concludes Flaherty.

Description
A healthcare IT services provider that supports, installs, and maintains over 500 physician computer systems and networks across the U.S. One of the Top IT Infrastructure Service Providers, RemoteWorks provides managed IT services and hosts private networks for clients across industries. However, it has been synonymous with healthcare IT, providing consultation, support, and implementation for the many products utilized by healthcare businesses and practitioners. An expert in EHR technology, RemoteWorks is also proficient in developing cutting-edge speech recognition and imaging solutions to simplify life for both physicians and patients 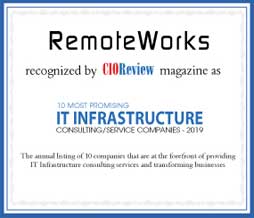 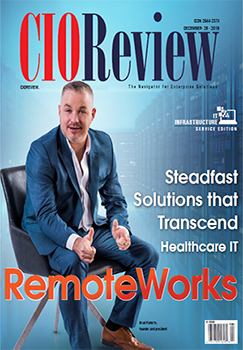